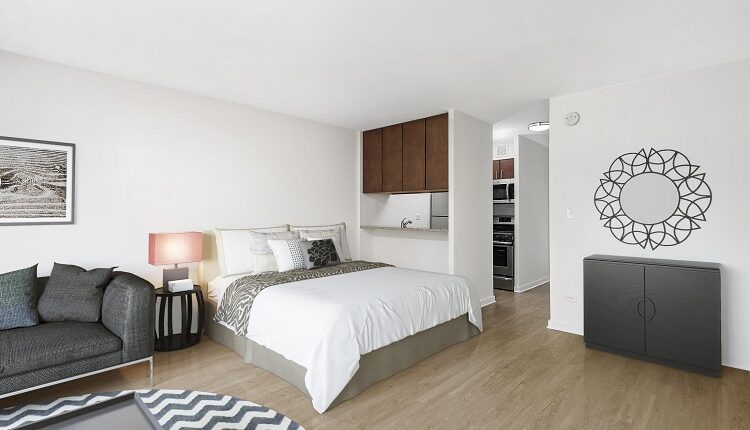 Looking for a new apartment to call home? As you browse through all of the options on the market, it can be difficult deciding between a studio apartment vs one-bedroom apartment. You may already be leaning towards one or the other but it’s helpful to get a second opinion on the matter.

Consider this guide your second opinion! We’re going to go through all of the benefits and drawbacks between a one-bedroom apartment and a studio apartment so you can decide with confidence. After all, searching for a new place to live shouldn’t be stressful – it should be fun!

What Is a Studio Apartment vs One Bedroom?

Let’s get the obvious definitions out of the way so everyone’s on the same page. A studio apartment is a self-contained apartment. This means that all of the normal ‘separate’ rooms, like a bedroom and kitchen, are all in one room. Think of your bedroom but with a kitchen and a living room area that you can see as you look around.

A one-bedroom apartment is similar to the apartments or homes you’re familiar with, except it has a separate bedroom instead of the open floor plan that a studio has. These can be great for couples since it doesn’t force you to be. Now that you know the definitions, let’s continue to explore a studio apartment vs 1 bedroom.

Now it’s time to dig deep and see the biggest differences between these two living situations. Go ahead, make a cup of coffee, and get out your notepad – you’ll be doing some comparing today. Remember that your decision should primarily be based on your lifestyle and budget, everything mentioned below are things to consider.

Although, we don’t blame you if some of these are a dealbreaker. In fact, we welcome deal-breakers, which makes the decision process a lot simpler!

If you’re looking at the price low to high when you search for apartments, you might want to focus on a studio apartment. Multiple factors decide a rental price, not simply square footage but studios do tend to be smaller and more affordable than one-bedroom apartments.

The location might make the difference here. You’re more likely to find a one-bedroom that costs the same as a studio apartment but it may not be in an area you want to live in.

Still not convinced? Choosing a studio apartment might also mean lower utility bills. While it isn’t a guarantee, since studio apartments are normally smaller than a one-bedroom, it doesn’t require a lot of electricity or gas.

Overall, studio apartments are a great choice if you’re pinching pennies and don’t mind being a little more cramped than usual. If anything, it means you’ll just need to take more walks around a nearby park to avoid cabin fever.

Of course, we’ll need to dive into the cons of studio apartments. The first one, you guessed it, there is a lot less space. If you’re someone that needs a lot of space, maybe you have a lot of belongings or plan on having a lot of guests over, then a studio apartment might not do it for you.

The benefit of having to furnish less might be a drawback if you already have furniture you love and now need to downsize because a studio won’t fit everything you own. That means buying new furniture and ensuring it’ll all fit.

Something else that might annoy you is that there are no separate spaces. At first, this open space plan seems great but if you love to have guests over – goodbye to privacy. It might also be difficult for you to work from home when your desk is right next to your bed.

Still not sure? It’s time to look at the rival for the studio apartment…the one-bedroom. Same deal as before, let’s start with the benefits.

At this point, the biggest benefit is obvious: space! Unless the studio apartment is huge, you’ll notice that most one-bedroom apartments are bigger than most studios.

It’s for that reason that having a dedicated space for sleeping and living is a better option if you plan on living with someone else. You’ll have more space for storage and comfort, studios will feel cramped very quickly.

If you like to entertain a lot of people, the bigger space will also be necessary for a one-bedroom. Sure, you can entertain in a studio apartment, but it might mean people will be surrounded by your personal stuff.

Many one-bedroom apartments also have a separate kitchen as opposed to a small kitchenette that studio apartments have. If you love cooking and baking, this might be essential for you.

The price is the biggest drawback for a one-bedroom apartment. It’s not only more expensive to rent one but you’ll be spending more money on furnishing and decorating it. The utility bills will also be higher than renting a studio apartment.

Another drawback is that you’ll be spending more time cleaning it and if you don’t have furniture ready to fill up space – it might be a bit before you can make it feel like home.

Now that you know the biggest pros and cons for both studio apartments and one-bedroom apartments, you should be one step closer to making a choice.

Looking through all the options for a new place to live is both exciting and stressful. Moving, in every way, is more worrisome than it needs to be. One of the biggest choices you might be faced with is deciding between a studio apartment vs one-bedroom apartment.

While there are benefits and drawbacks to both, the answer depends on your budget and lifestyle more than anything else.

If you found this helpful, be sure to check out the rent portion of our blog!

Hi, I am Foster Ross and I am a web designer and content writer. I have 3 years of experience in writing content for different websites.

A Lighting Fixture that Will Always Light Up Your Life

Several collections of out door furniture at a mart

The Homeowner Hustle: 6 Tips for Renting Out Your House

Here’s the Best Way To Find Apartments in NYC

5 Tips When Remodeling your Home

What Technologies Are Used for Digital Transformation in…